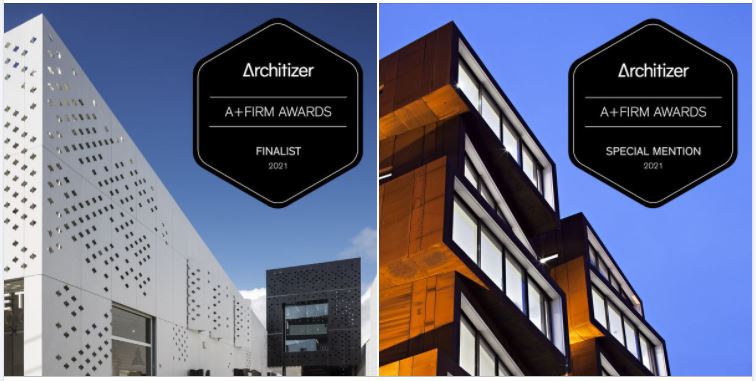 Architizer is the world’s largest online platform for architecture and their international awards programme – the A+ Awards - is in its 9th year. In 2020, the spotlight turned to architecture’s role in a changing world and, in the inaugural A+ Firm Awards, we were proud to be named a Best in Australasia finalist (which judged us as one of the Top 5 firms in the category) and to receive a special mention in the Best Medium Firm category - a global accolade.

As with other awards, the jury of the A+ Awards includes members from the architecture realm but, in this case, they are joined by luminaries in the fashion, art, technology and business world. Architects are often accused of operating in an echo chamber of peers so, in an effort to democratise the results, the A+ Awards elicits opinion from the public too. Last year, that accounted for 400,000 votes.

We love to enter awards – both locally and internationally – and see great value in it. Of course, having work critiqued is both inspiring and motiving. It really lifts your game. The local NZIA awards are exciting because the results are a surprise on the night. We don’t see these events as about coming first. They’re a celebration of a joint achievement with our clients, a good excuse to get together and head out to dinner afterwards to recognise the opportunity we’ve been given and the journey we’ve been on together.

Internationally, the World Architecture Festival gets our vote as the top awards programme. That’s because it includes a live presentation of work. It’s not just an online submission. Entrants are required to front up in person, give a 10-minute talk, and then be interrogated by a jury who will make their pronouncements that evening. It’s exhilarating and addictive. Representatives from RTA Studio have attended the festival 11 years in a row now hosted in Barcelona, Singapore, Amsterdam and Berlin. It not only gives us a chance to catch up with former colleagues working in the Northern Hemisphere but to explore new architecture in other cities, often with locals acting as guides. Cementing old friendships and forging new contacts is part of the appeal. And although we might get to meet the ‘starachitects’ - people such as Patrick Schumacher who heads up Zaha Hadid’s office, or Jacques Herzog who pretty much defined the post-modernist movement - it’s the young emerging firms that make the experience so incredible. The festival delivers a snapshot of what is happening globally and a diversity of scale and culture. Seeing what architects in third-world countries can do with local stone and bamboo is mind blowing.

So, yes, we may return from the World Architecture Festival with some more awards to display in the office, and that’s an incredible acknowledgement of our work for sure, but these awards give us so much more. They give us a more rounded perspective of what architecture can do for community.