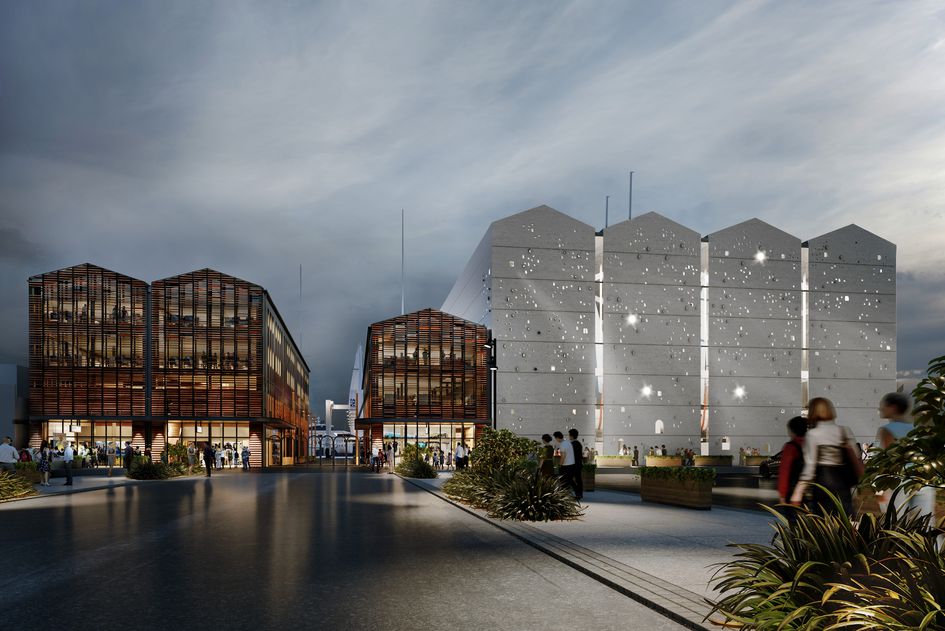 Crucial to the vision for the regeneration of the Wynyard Quarter is the goal to retain the maritime nature of the environment and Orams Marine Village, a fixture on the Auckland waterfront for the past 50 years, is central to the nautically nuanced built landscape.

When RTA Studio was approached, as part of the redevelopment of their site, to design two under-cover workshops to augment their build, repair and refurbishing services for superyachts as well as a retail/commercial premises alongside this, we naturally used marine influences as our muse.

The extension to the village will be constructed in two phases: firstly, two ‘sheds’ adjacent to the current waterfront slipway and yard where these mega-sized luxury vessels can be accommodated and secondly a premises with retail at street level and workshop/offices above that subcontractors aligned on major projects can lease.

Boasting the largest superyacht facility in the Pacific, Orams Marine is internationally respected and an attractive proposition to yacht owners in the Northern Hemisphere who can have these vessels refurbished in the European winter.

The 19,274 square-metre site predominates over a lively precinct in Westhaven and this enviable, historic position called for a landmark response. The scale and materiality of the nearby silos – iconic towers that once stored cement - is reflected in the design of 25-metre-tall sheds with their concrete facades. Their verticality is not only practical to house the superyachts but also aesthetically elegant. The façade is broken into four gabled sections (behind which there are, in fact, only two sheds) and apertures sprinkle the surface. The window placement may seem random, but at night LED lights shine through and, when viewed from afar, savvy stargazers might spot the distinct formation of the Southern Cross – a reference to the ancient navigators who first paddled their canoes up into this harbour.

To the west of the sheds, where New Zealand’s biggest straddle crane plucks the superyachts straight from the water and, moving on gigantic rubber tyres, rolls them inside, phase two of construction is planned. These three mixed-use gabled structures pay homage to the industrial red-brick buildings that once populated this precinct. Cast terracotta louvres, imported from Spain, will be installed on different angles to modulate the façade and lend it porosity.