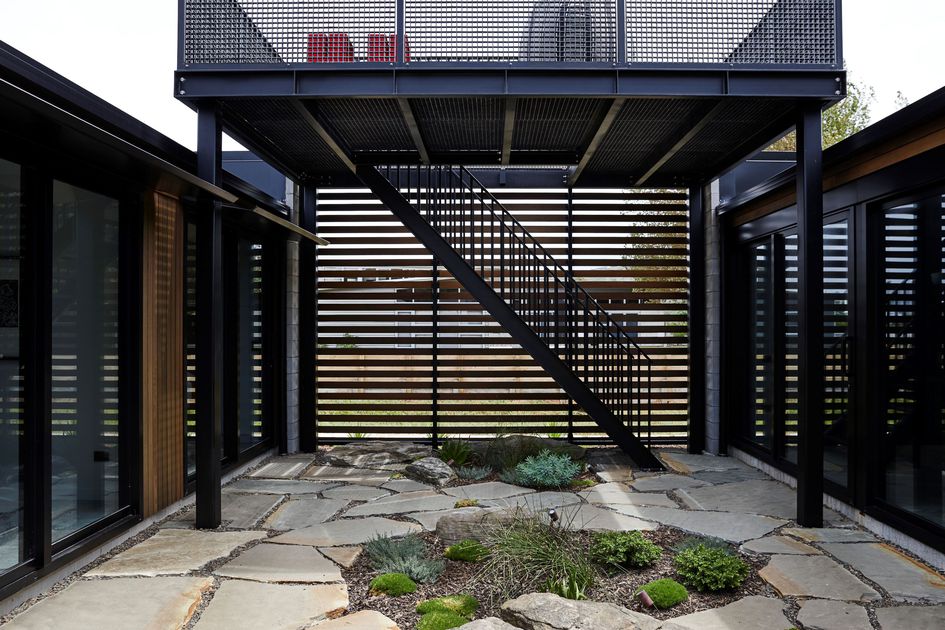 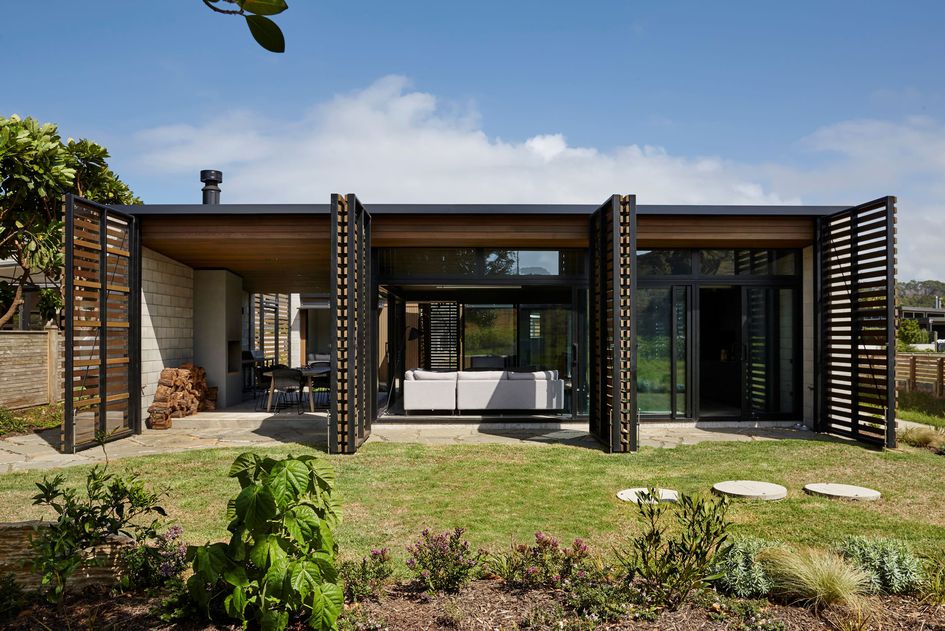 Those in the know wax lyrical about the curvaceous crescent that is Matapouri Bay. With white-gold sand, rockpools to fossick around in, and a fish ‘n’ chip shop nearby, it’s a slice of Kiwiana that is pretty much holiday perfect. But what do you do when your location is one back from the beach, and there’s a slightly suburban feel to the immediate neighbourhood? You build a roof deck, of course.

This lock-up-and-leave bach for an Auckland family is in a quiet cul de sac within easy walking distance of the sea. Bounded by houses on either side, there is a rural landscape to the rear of the site, although future builds could partially block this.

The property was a little hemmed in and, with no obvious view to focus on, RTA Studio devised a plan that is more inward focussed – a dwelling set around a flagstone courtyard with a platform that pops up above the roofline as a lookout and alternative entertaining space.

Although its footprint is a simple rectangle, its short end to the street, the layout within is more akin to an encampment of buildings around open ground with the living zones to the north-west and the bedrooms and garaging to the south-east.

The journey of entry moves from the cedar-slatted front door down a timbered hall on a wooden walkway past the bedrooms – feeling more outside than in – then across the courtyard which is open to the sky and furnished with rocks and hardy grasses, to the living rooms beyond.

An unpretentious material palette incorporates concrete-block walls as robust blades that anchor the flanks of the dwelling. Between these, at the front and rear, a rhythmical sequence of large cedar-slatted doors, offer flexibility of open-ness or privacy. In the evenings, their transparency gives a golden glow to the geometric outline.

On arrival, the family are greeted by a simple patch of lawn and a box encased in timber slats that looks, if not exactly foreboding, secure and striking. The cedar-slat sliders are like a veil that pull back when the crew are in residence. It doesn’t take long for the family to kick off their shoes, for the teens and tweens to install themselves in the bedrooms and bunkrooms, and for time to slow down.

Internally, the aesthetic air is bulletproof for the beach with smooth concrete floors to shake off the sand, exposed block walls to hark of baches past and, always, the light streaming in through the slats, from the courtyard and the covered outdoor living space which flows on seamlessly from the main living room. In fact, about 50 per cent of the footprint could be considered alfresco.

At dusk, before the last of the bathers leave the beach, it’s timely to ascend the stairs to the gin terrace, an industrial structure that hovers above the courtyard. The balustrading and floor are made of a micro-mesh fibreglass grating often used on boats. This non-slip surface is maintenance-free and the apertures allow dappled light to spill through the platform, so the bedrooms below aren’t too shaded.

From here, it’s nice to quiet down with a London Dry in hand, as the view sweeps around from a pohutukawa grove on a nearby hillside reserve to the bay that is an undisputed treasure of the Northland coast.